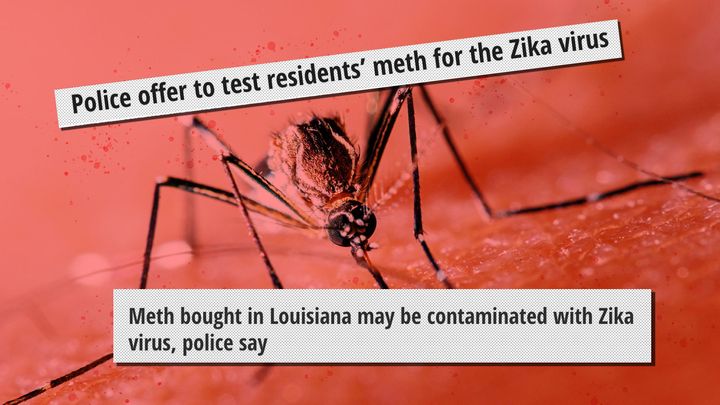 Reporters, not drug users, apparently were the only ones gullible enough to fall for an unoriginal hoax by police in Louisiana.

The Harahan Police Department on Saturday made a pretty obvious tongue-in-cheek post to its Facebook page offering to test methamphetamine for signs of the Zika virus.

The post, which went viral over the weekend, reads:

***WARNING: *** If you have recently purchased meth in any area of Louisiana it may be contaminated with the Zika Virus. Please bring all of it to your local Police Department and they will test it for free. If you’re not comfortable coming to us, an officer will be glad to come to you and test your Meth in the privacy of your home. Please spread the word! We’re available 24/7/365. Be Safe! ~Ofc Moody

The post has amassed more than 800 comments and 5,000 shares. The majority of commenters got the intended humor, with one person jokingly commenting, “I’ll bring my pound right over,” and another saying, “Even meth heads aren’t that stupid.”

Zika, according to the Centers for Disease Control and Prevention, is spread primarily by mosquito bites, but can also be transmitted through sex and from a pregnant woman to her fetus.

Still, at least three Louisiana media outlets ― Lafayette’s KLFY-TV, New Orleans’s WVUE-TV, and The Advocate, which is based in Baton Rouge ― apparently took the post seriously.

“Louisiana police are asking people who might have crystal meth in their possession to ... have it ‘tested’ for the Zika Virus,” KLFY-TV reported, with no mention of a possible hoax.

WVUE-TV provided readers with a list of possible symptoms of Zika infection and said, “Police have not said how much meth is contaminated.”

The Advocate reported on the possibility of contaminated meth and provided readers with information on “where it will be tested for free.”

To its credit, The Advocate later updated its story:

Police Chief Tim Walker acknowledged Sunday that the post was just a stunt to raise awareness of drug abuse, though, and that — no, it’s not actually possible to have Zika in meth.

As of Monday morning, the stories by KLFY-TV and WVUE-TV remained unchanged.

According to Harahan police officer Keith Moody, who operates the department’s Facebook page, no one has taken the police station up on its phony offer to test meth for Zika contamination.

Moody told ABC News the post was an “attempt at humor” and an effort to raise awareness about dangerous drugs.

The methamphetamine and opioid epidemic are alarming and show “no sign of slowing soon,” he said.

Moody was apparently inspired by police in Gratis, Ohio, who posted nearly the exact same warning in May. However, there was one very noticeable difference:

“Disclaimer: methamphetamine can’t be a host for the Zika virus,” the Gratis Police Department wrote.

Apparently, cops in Louisiana thought that went without saying. They were wrong.